Join us this weekend
In preparation for Thanksgiving, we will have open 4 excellent wines for the occasion!
We will open 2 different Gamays grape from 2 different areas in Beaujolais region and 2 modern style wines, a red Cabernet Sauvignon from Chile and a white Cote du Rhone!

On Saturday for our local spirit Fall Series we will showcase Standard Distillery from Brooklyn!
We will pouring their Rye wormwood whiskey and their smoky Agave!

Éric Texier became a winemaker after a prior career and without any background in vines or wines. As such, his methods developed not from years of schooling, but from his readings, his visiting winemakers around the world, and working in Burgundy with Jean-Marie Guffens at Verget. After giving up the idea of buying vineyards, which was too costly a proposition for a beginner with his ambitions, he started a small negoce where he selected interesting vineyard plots from hard-working farmers who grew the healthy grapes he wanted to buy and vinify.

He re-discovered nearly forgotten areas of ancient fame, like Breze`me in the northern Cotes-du-Rhone and the new St.-Julien en St.-Alban, a heretofore unknown plot of ancient Syrah vines on the west bank of the Rhone that had been tended by protestant monks and has never seen artificial fertilizers or pesticides. The wines are vinified in their areas of production, and when they have obtained their AOC, the young wines are transported to Charnay-en-Beaujolais, just north of Lyon, where Eric lives and has recently acquired a wonderful elevage cellar. Exact steps in vinification vary according to the varietals, terroirs and vintages, but the goal is always to provide the grapes, musts and wines with the best environment and intervene as little as possible.

100% Clairette (sometimes contains Marsanne). These Texier vines are planted in the granitic clay-limestone soils of the Saint-Julien-en-Saint-Alban area on the western side of the Rhône River in the Ardèche. The bunches are hand-harvested and direct-pressed in whole clusters and fermented with native yeasts in cement tank. The wine spends 6-8 months on fine lees without any addition of sulfur. Bottled unfined and unfiltered, with a small 30mg/liter dose of sulfur. The name of the wine is a reference to Adèle Blanc-Sec, a French adventure cartoon heroine.

The Barbet family has long been intertwined with wine-making in Beaujolais. As early as the 1900s, they were one of the most famous négotiants in Beaujolais with holdings in various crus. Yet, uniquely for a négotiant, individual domains connected to Barbet continue to produce & label their own wine independently, using traditional methods.

Beau! is everyday Beaujolais that doesn’t represent any one of the ten Crus, but instead is simply easy-drinking wine. That, of course, doesn’t mean this wine isn’t delicious & well-made. From 40 year old vines, the grapes are fermented in whole-clusters before aging in steel & cement. Bursting with cherry & raspberry fruits, it’s a pop-the-top easy to enjoy! 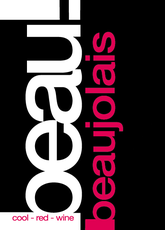 The Desvignes family have been Morgon vignerons since the mid-1700’s. Claude-Emmanuelle and her brother Louis-Benoît are the 8th generation. Their father had been selling off fifty percent of the family fruit; they ended that practice and began bottling the entire production under the Desvignes label. Their 13 hectares of vines lie exclusively in the cru of Morgon, which of the 10 Beaujolais crus produces some of the most long-lived and complex wines, thanks to high concentration of schist and manganese in its soils. The Desvignes holdings are divided into numerous small parcels, with the vines averaging 70 years old. Farming is organic, and they work the soils actively. Harvest is by hand and typically later than many growers in the quest for full ripeness.Desvignes bottles four wines. The largest bottling and the most fruit-forward, easy-drinking of their structured style of wines is La Voute Saint-Vincent, a blend of parcels in Douby, north of the town of Villié-Morgon. The next bottling comes from the family’s 3 hectares in the most famous part of Morgon, the schistous Côte du Py. Within the Côte du Py, they also have mainly very old vines in a notable lieu-dit called Javernières with sandy limestone soils; from this site they bottle two wines, a “regular” Javernières, which includes the few younger (30-year-old) vines in the mix, and the smallest bottling of all, Les Impénitents, which features vines planted from 1912-1914.

In the cellar, Desvignes employs what is generally referred to as “traditional” vinification in Beaujolais, which is to say semi-carbonic, fermenting mainly whole-cluster fruit in open-top tanks. The amount of destemmed-vs-whole-cluster fruit and the maceration time vary with vintage and parcels. For gradual extraction, Desvignes allows the fermentation and maceration to go long and uses a grill to keep the cap submerged rather than punching it down. There are only concrete vats: Louis-Benoît has commented that “barrels are like make-up”. Sulfur is used judiciously, varying with the vintage.  The wines are lightly fined and sometimes filtered.

100% Gamay. The beginning of the Desvignes range is La Voûte Saint Vincent, which comes from various estate parcels in the Morgon climat of Douby, north of the Côte du Py and bordering Fleurie. Douby has deeper, sandier, granitic soils and yields a more supple style of Morgon compared to Py’s famously muscular one. The vines for La Voûte average 60 years old. Viticulture and vinification are consistent across all Desvignes wines. The vines are organically farmed and harvested by hand. The fruit is generally fermented in whole clusters (with some variation by vintage: in 2017 La Voûte was completely destemmed due to severe hail damage) in open-top concrete vats, with a maceration of 12-13 days and with a submerged cap. La Voûte is bottled in April following the harvest. Annual production is approximately 2000 cases, making it the largest Desvignes bottling. The wine is named for the vault or “voûte” of the old family house and for the patron saint of winemakers, St. Vincent. 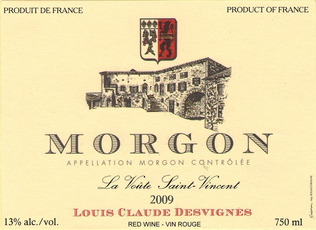 Clos des Fous was founded in 2008 by Pedro Parra, Francois Massoc, Paco Leyton and Albert Cussen. The four friends were tired of hearing that Chilean wine was all boring, industrial, green and overripe so they set out in search of the Dark Side of the Moon. Francois and Pedro are longtime friends, akin to brothers, and both have spent much time abroad making wine and working vineyards in Europe. Pedro Parra has a Masters degree in precision agriculture and a Ph.D. for his work with terroir. Pedro currently consults as a terroir specialist around the globe in Argentina, Oregon, Italy, France, Spain, Georgia, Croatia and beyond working with world renowned vignerons like Jean Marc Roulot. The Clos des Fous philosophy is to produce wines with tension from grapes grown in extreme terroir with minimal intervention in the winery. Clos des Fous owns and manages vineyards in Malleco, Guarilihue, Alto Cahapoal and Western Aconcagua. They produce a variety of wines and work with multiple iterations of Pinot Noir, Cinsault, Pais, Cabernet Sauvignon, Chardonnay and Riesling at their winery in Cauquenes, Maule. Clos des Fous is one of Chile’s most innovative, inspiring and authentic wineries producing some of the most exciting wines in South America.
Notes
Beautiful ruby red colour, with a characteristic nose of red fruits and black cherries. Hints of spice, black pepper and green tea develop in the glass. On the palate, the wine is silky, generous and broad, with soft tannins. Its excellent acidity is supported by subtle minerality and an elegant finish. 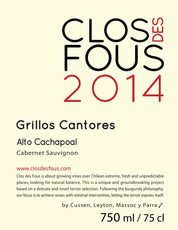 The distillery is founded on experimenting with wormwood spirits. Early on in their trials, wormwood was an illusive banned ingredient, best known for its use in traditional absinthe. On their first distillation they fell in love with more than the myth though, the subtle lucid wakeful feel was unlike any other spirit. Unknown to their at the time, spirits with wormwood were nearing the end of a century old ban.

Only making small batches, hand-made still and using a grain-in-column distilling technique makes for a completely crafted method that they use to this day at distillery in north Brooklyn on the border of Bed-Stuy and Bushwick, a short walk from where they started experiments in the mid 2000s. The grain come from upstate farms where they grew up around, the same region where they source all local organic NY grains from and grow their own wormwood. It makes the spirits smooth at 90 proof with distinct layers and complexity that continue long into the finish of every sip. This is the standard distillery – pushing the boundaries of classic liquors by redefining and reinventing the craft of what wormwood spirits can be.

Notes of rye spiciness and smoky oak- no water and no sugar is needed, and no anise or licorice is used. Crafted over a decade, bottling the feel of absinthe and the heart of rye. The wormwood spirit is a complex and perfect go-to drink that redefines what wormwood spirits can be. Substitutes uniquely for classic whiskey cocktails because of the grain and oak aging.

Notes
Using a Whole Agave, hearts and leaves, and smoking it with pineapple and pumpkin seeds we have created something new here. An agave spirit with similarities to tequila and mezcal but distinctly wormwood influenced with a corn thin mash fermentation. There is a balance with the smoothness of a tequila and finish of smoky mezcal, the wormwood rounds out the spirit while creating a complex front, middle and finish. We brought up whole agave from Texas to make this limited release. Spicy fresh cut pepper notes come through on the nose and are balanced with a deeper smooth body and a smokier finish, a distinct variation on agave spirits.