Come to celebrate the Spring season with us, we will have 3 organic wines,
A white Godello grape from Galicia, Spain
A Negroamaro red grape from Salentto, Italy(vegan)
And a Gamay red grape from Burgundy, France!

Though Fragas do Lecer only dates back to 2005, the Boo-Rivero family have been growing indigineous varietals in this area for over 30 years. Today, the winery is located in the Monterrei DO in Galicia, in northwest Spain, with 45 acres of vineyards in 28 different parcels. This diversity results in various soil types— granitic, sandy and slate— offering great complexity to the wines. They have over 10 acres of Godello and Mencia vines that are over 30 years old, as well as some of the oldest Godello and Mencía vines in the region (over 50 years old). The estate is practicing organic.

100% Godello from the Tamaguelos Vineyard; the vines here are 30 years old on average, yielding small amounts per vine but high concentration. Harvested by hand, with a preliminary selection in the vineyard.
Temperature controlled fermentation, and then aged in stainless steel on fine lees for 7 months, followed by at least 5 months in bottle before release; unfined and unfiltered.
Floral aromas lead to intense fruit notes of apple, pear, citrus and aromatic herbs. On the palate it shows creamy texture, with well-balanced and pleasant acidity; fresh fruit notes are balanced with mineral. Luscious with a well-rounded finish.

In the southernmost part of the heel of the “Italian boot”, otherwise known as the Salento Peninsula of the Puglia region, the Perrini family has been growing grapes and making wine for generations. For many years, most of their fruit was sold off to négociants, as the means and finances to estate-bottle were prohibitive. Current generation Vito and his sister Mila Perrini set about changing that in the 1990’s, building an underground cellar and converting their fifty hectares to certified-organic viticulture–neither of these steps being the norm for a bulk-production-oriented region accustomed to heavy-handed, high-alcohol red wines. Their vines average 30-35 years of age at this point, spread amongst several zones in the hills around Castellaneta near Taranto on a mix of sand, limestone and clay soils. The vineyards are plowed in the spring, and yields are kept to around 55hl/ha, modest for the region and the warm, easy-ripening climate. Most unusual for Puglia are an underground cellar; manual harvest; and natural yeast fermentation. Perrini wines are remarkably balanced, light-handed and savory compared to the usual Puglian fare, especially at their very modest price level.
100% Negroamaro. Perrini’s Negroamarro comes from estate vines averaging 30 to 35 years old, with some getting up to 60 years, with full southern exposure on flat and slightly hilly sites. The soils are a mix of sand, limestone and clay, with a rockier nature on the slightly higher-elevation sites. The farming is certified organic.  The well-ripened but not overly ripened fruit is harvested by hand into small baskets and whisked to the winery to cool down. The grapes are pressed and the juice fermented with natural yeasts in stainless steel tanks with maceration lasting 12-14 days. The wine is aged in steel tank. 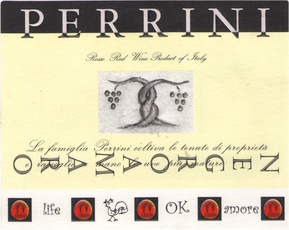 The Desvignes family have been Morgon vignerons since the mid-1700’s. Claude-Emmanuelle and her brother Louis-Benoît are the 8th generation. Their father had been selling off fifty percent of the family fruit; they ended that practice and began bottling the entire production under the Desvignes label. Their 13 hectares of vines lie exclusively in the cru of Morgon, which of the 10 Beaujolais crus produces some of the most long-lived and complex wines, thanks to high concentration of schist and manganese in its soils. The Desvignes holdings are divided into numerous small parcels, with the vines averaging 70 years old. Farming is organic, and they work the soils actively. Harvest is by hand and typically later than many growers in the quest for full ripeness.

Desvignes bottles four wines. The largest bottling and the most fruit-forward, easy-drinking of their structured style of wines is La Voute Saint-Vincent, a blend of parcels in Douby, north of the town of Villié-Morgon. The next bottling comes from the family’s 3 hectares in the most famous part of Morgon, the schistous Côte du Py. Within the Côte du Py, they also have mainly very old vines in a notable lieu-dit called Javernières with sandy limestone soils; from this site they bottle two wines, a “regular” Javernières, which includes the few younger (30-year-old) vines in the mix, and the smallest bottling of all, Les Impénitents, which features vines planted from 1912-1914.

In the cellar, Desvignes employs what is generally referred to as “traditional” vinification in Beaujolais, which is to say semi-carbonic, fermenting mainly whole-cluster fruit in open-top tanks. The amount of destemmed-vs-whole-cluster fruit and the maceration time vary with vintage and parcels. For gradual extraction, Desvignes allows the fermentation and maceration to go long and uses a grill to keep the cap submerged rather than punching it down. There are only concrete vats: Louis-Benoît has commented that “barrels are like make-up”. Sulfur is used judiciously, varying with the vintage.  The wines are lightly fined and sometimes filtered.

100% Gamay. The beginning of the Desvignes range is La Voûte Saint Vincent, which comes from various estate parcels in the Morgon climat of Douby, north of the Côte du Py and bordering Fleurie. Douby has deeper, sandier, granitic soils and yields a more supple style of Morgon compared to Py’s famously muscular one. The vines for La Voûte average 60 years old. Viticulture and vinification are consistent across all Desvignes wines. The vines are organically farmed and harvested by hand. The fruit is generally fermented in whole clusters (with some variation by vintage: in 2017 La Voûte was completely destemmed due to severe hail damage) in open-top concrete vats, with a maceration of 12-13 days and with a submerged cap. La Voûte is bottled in April following the harvest. Annual production is approximately 2000 cases, making it the largest Desvignes bottling. The wine is named for the vault or “voûte” of the old family house and for the patron saint of winemakers, St. Vincent. 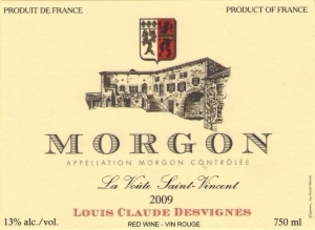