Join us this Friday!
We will have open 3 interesting natural wines from Portugal,

Natural Wine is farmed organically (biodynamically, using permaculture or the like) and made (or rather transformed) without adding or removing anything in the cellar. No additives or processing aids are used, and ‘intervention’ in the naturally occurring fermentation process is kept to a minimum. As such neither fining nor (tight) filtration are used. The result is a living wine – wholesome and full of naturally occurring microbiology

Herdade de Cebolal is the southernmost estate found within the Setúbal Peninsula 170K south of Lisbon and in close proximity to the Atlantic Ocean. Cool breezes from the Atlantic give freshness and moisture allowing grapes to slowly ripen reaching phenolic maturity while retaining high acidity. The property is located in the valley of two mountains, Serra de Santiago do Cacém to the north and Serra de Cercal to the south. The soil is incredibly varied. Limestone, clay, loam, four different types of schist, chalk, and sand can be found on the estate.

Herdade de Cebolal was founded by Luís Mota Capitão’s great-great-grandfather Caio de Loureiro 150 years ago. Isabel, Luis’ Mother worked on the family estate, the 4th generation winemaker for 20 years. She continues to work alongside Luís, but he is now in charge and has been, at age 32, for more than 10 years.

The Vale das Eguas wines are just two of many different cuvees produced on the estate. All viticulture at Herdade de Cebolal is organic and they use several interesting methods to enhance the soils including gathering seaweed from the nearby Atlantic and employing sheep to keep weeds trimmed and for the manure. To combat the effects of climate change, they are creating an agroforest around their vines which provides shade and sequesters rain water in the soil. They also keep bees so it’s important not to spray insecticides or use chemical herbicides. All grapes are hand harvested and the wines are fermented spontaneously. The wines are fermented in INOX and held 6 months before bottling. A modicum of sulpher is used only before bottling.

Lisboa is a long, thin region running up beside the Atlantic to the Northwest of the city of same name. Wind is inevitably a strong feature on the coast – these undulating hills bristle with windmills, and the coastal vines are wind-stressed and the grapes hard-pressed to ripen. Just a little way inland, however, a backbone of hill and mountain ranges offers some protection to many eastern parts of the Lisboa region including the sub region Óbidos.  Lisboa is a regional designation, similar to a French Vin de Pays, but within Lisboa there are 9 distinct DOC designated growing areas including Óbidos which is home to Quinta Várzea da Pedra, a fourth generation wine farm. Brothers Tomas and Alberto Emidio took control of the 15 hectares of vineyards and the cellar in 2015 and started bottling part of the production, focusing on quality and character. The work in the vineyards is free of chemicals, practicing organic and the harvest is made by hand emphasizing careful handling of grapes which are then fully destemmed, crushed by foot and fermented spontaneously. The whites are held for 6 months before bottling in stainless steel and the Tinto Reserva spends 12 months in large neutral french oak barrels. 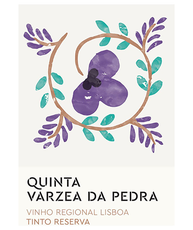