Come in on Friday to stock up on wines for your long weekend or February Break!
We will open 3 wines from the Piedmont region in northern Italy:
A white Arneis grape, a red Dolcetto grape and a Nebbiolo red, plus a good value french blend from the Languedoc-Roussillon region!
Tasting time: 6:00 to 9:00pm

See below for full events information:

The Antica Cascina dei Conti di Roero estate was established in the early 1950s, when the Olivero family, Daniela’s parents, bought the Valmenera farmhouse in Vezza d’Alba. They added the land and vineyards already owned in the Certuti region, better known as Sru, in the municipal districts of Canale and Monteu Roero, now a UNESCO World Heritage core zone. In the beginning, it was a typical farm, cultivating fruit, vines and cereal crops, as well as keeping livestock. The turnaround came in the early Seventies, when the decision was made to focus exclusively on viticulture and winemaking.

Vineyards, but also woods, fields, hazelnut trees and meadows: all this is the Roero. We live in a territory where the value of biodiversity is uniquely rich. Their woods are home to very special trees and flowers, including rare species of wild orchids. They are home to lots of different wild animals: roe deer, foxes, squirrels, badgers, hedgehogs, owls and numerous other species of birds. The local woods are also known for their production of tuber magnatum pico, the Alba White Truffle, a highly-prized and very aromatic underground fungus which is internationally renowned.

The white
This is the native white grape variety that best expresses the Roero terroir. The grapes grow in sandy soil, a reminder of the ancient seabed and still rich in fossil shells today. This wealth is expressed in intense mineral notes. This single-grape Arneis can age for several years, becoming more refined and aristocratic the older it gets.

Ciabot Tanasio, an antique name encompassing more than 70 years of history made by the Sobrero family, attentively working the vineyards of the rolling Castiglione hills to obtain their delicate nectar and transform it into wine. The tradition has been passed along the generations and now sees the offspring of Francesco Sobrero take an active part in the company, enriched by the third generation. A winery dynamic and in step with the times.

Sobrero Winery: passion, love and tradition. An increasing passion, a love that continues to grow stronger, and a great tradition closely tied to the land and the territory. Three words, three “creeds,” that merge and exist for one purpose only: excellence in wine. Since the 1940’s and the efforts of the grandfather Francesco, the vital breath of the Sobrero Winery continues to be reinforced. From the 1960’s with Settimo and Pier Franco, and Flavio since 2000, the winery has experienced years of continuous growth: from the sale of bulk to bottled wine, from the purchase of new vineyards to the expansion into export markets. The wines produced by the Sobrero family are a constantly ascending parabola, a symbol of the modernity that crosses time without erasing its foundation, the tradition that accompanies the work in the vineyard and the cellar, step after step.

Sensory description: A lovely, star-bright ruby, deep and lustrous. A generous, warm bouquet features a wide-ranging panoply of aromas, releasing lively notes of redcurrant, raspberry, cherry, and violets. Pungent nuances of underbrush, rosemary, and wild herbs complete a complex and fragrant offering. It expands to notable depth and breadth in the mouth, with a judicious acidity bolstering dense fruit and an impressive structure. An almost endless finish edged with hints of earth simply caps a very delicious wine. Overall, a Dolcetto of great distinction and body and with a pronounced vein of minerality.
Serving suggestions: the complexity of this wine makes it an ideal partner to fine meat dishes, hot antipasto dishes of some richness, and main courses of meat. 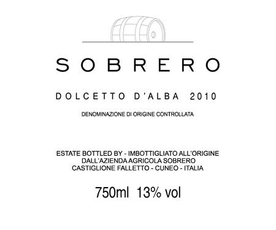 They have 13.5 hectares of estate-owned vineyards in an area acknowledged by UNESCO as World Heritage, due to the beauty of its vineyard landscape. Their first investment, in 1998, was the purchase of Casina Penna, in the municipality of Canale. Over the years, They have continued to invest and to grow.

Between five and two million years ago, during the Pliocene, the Roero district was covered by the sea. Its soils were formed by the sedimentation of detritus on the seabed and you can still find shells and fossils of whales and sea animals in our vineyards today. This ancient sea left us an immense geological wealth, influencing the types of soil, calcareous marl, which differentiates according to the geological era. All the soils are well suited to the cultivation of vines.

The vineyard landscapes of the Langhe-Roero and Monferrato became part of the UNESCO World Heritage List in June 2014. An acknowledgement of the beauty of the hilly landscape scattered with vineyards, medieval towers, Romanesque churches and castles. And there’s more. UNESCO has acknowledged the value of “cultural landscape”, the result of the combined action of nature and the skilful work of men and women who, down through the centuries, have preserved the hills, cultivating vines and making wine. This is why we like to talk about “world heritage”.

Grown in the vineyards of Cascina Valmenera, the heart of their estate. They call them “their stairway to heaven”, to quote Led Zeppelin, because the rows are laid out in an amphitheatre that seems to climb up into the sky. They were planted at the end of the Nineties and enjoy south-westerly exposure. There, in the sandy marl of what was once a seabed, Nebbiolo is able to fully express it elegance and vigour.
Ageing: part in barriques which have already been used once, and part in large barrels, for about 8-9 months. Blending in steel for 4-5 months before bottling
Aromatic overview: ruby red: fine and delicate bouquet with scents of rose and violet, wild strawberry and raspberry; dry, harmonious and nicely persistent
Pairing: tajarin with meat sauce, lamb, white meat, game, medium-mature cheeses
Our recommendation: roast rabbit with rosemary

Three charming wines from the AOC Vin de Pays du Gard, the Reserve de la Saurine line-up is produced by the excellent Laudun Chusclan cooperative. The department of Gard forms a keystone between the southern Rhone and Languedoc Roussillon and these wines display the warm fruit-forward style that many contemporary Midi producers have embraced.

Notes
The Reserve de la Saurine rouge leads with bright notes of cherry and raspberry with a rich undercurrent of spice and pepper. It is a young wine that is juicy and balanced with enough tannin to provide structure while remaining pleasantly rich, mellow, and immediately enjoyable. 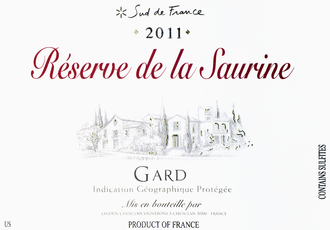