Vermentino is a fashionable aromatic speciality of Sardinia – it can make some of Sardinia’s liveliest whites, with a slight prickle of gas.

In a region dominated by co- op’s, Mora e Memo stand out for many reasons. This beautiful estate sits high in the hills in the South East of Sardinia just a few kilometres from the sea. Focused on the indigenous Sardinian varieties of Cannonau and Vermentino the combination of mature vineyards, sensitive farming and a delicate touch in their modern and technologically well equipped cellar results in elegant, vibrant mineral wines- very different from the rustic Sardinian norm.

Bright straw-green. Strongly herbal and minty notes to the pomaceous orchard fruit on the nose. Then bright, dense and saline, displaying an impressive spectrum of unripe stone fruit to tropical fruit flavors, complicated by a note of anise. Finishes big, round and long. A very fleshy style of Vermentino (it spends roughly two months on the lees) that packs a lot of power. The wine’s name, “Tino,” is a diminutive of Vermentino, though it’s so big and round you couldn’t be blamed for thinking they should have called it “Tone,” as in “Vermentone.” The vines are planted on mainly schistous clay soils with a little limestone.

Named after the winemaker’s son Victor, this is a special project from an already-established Organic winery based in Régnié-Durette that is run by Frédéric Sornin. The focus here is to make wines that are as natural as possible using the best grapes available.

As such, they have access to very old Gamay vines (40+ years), densely planted (10,000 vines/hectare) to sandy granitic soils. The fields are tended by sheep, and their droppings are the only fertilizer these vineyards will ever see. Everything is hand-harvested, as befits an Organic winery, and Nature is allowed to run its course with indigenous yeasts doing their work in stainless tanks. The wine then stays in tank until Spring, at which time it’s bottled unfined and with just a light filtering.

Victor, who at the time of this writing (2015) is just 12, participates with Frédéric in all aspects of winemaking. He is a true apprentice, learning at the side of his Papa so he too can one day make great wines on his own. It’s a real treat to watch this young boy grow into his own, and it will be interesting to follow him as he gains experience. But for now, we can enjoy this crisp bright Beaujolais Villages.

The wine has aromas of red fruits-wild cherries and some black raspberries.  There’s a little bit of cranberry, currant, and a tiny bit of a beeswaxy aroma as well.  Bright and delicious. 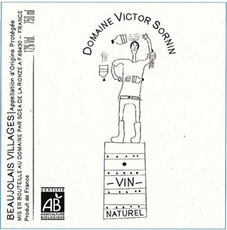 Here, proprietor Hans Nef and managing partner Hans – R. Michel bring their Swiss heritage to California’s Central Coast, where they aim to unite the best of both experiences.

They first discovered Paso Robles in the early 1980s and became enamored with this emerging wine country. Along golden slopes, where the Pacific coastline unfolds into rugged ranchlands and cowboy ambiance, a new generation of California winemakers was turning Paso Robles into one of the world’s most dynamic winegrowing regions.

In the mid 1990s we planted our first estate vineyard and established Vina Robles as a family winery specializing in varieties that excel in the region’s diverse terroir. The vision for Vina Robles is summed up by their motto: European Inspiration – California Character.

The Power of 4 – this Paso blend is more delicious than the sum of its parts. It combines grape varieties mainly from our prestigious Huerhuero Vineyard, located in the rolling hills of Paso Robles. Here, warm afternoons and cool evening breezes influence the grapes to perfect ripeness. The grapes were picked at cooler morning temperatures and cold soaked for two days prior to fermentation. Variable pump-over techniques were implemented during progressive stages of fermentation to enhance fruit extraction and balance out the tannin structure. The wine was then aged in both small and large format French, Eastern European and American oak barrels for 16 months in order to add complexity while enhancing a soft, velvety finish. Vina Robles’ RED4 blend showcases the structure of Petite Sirah, the spice and cherry qualities of Syrah, the forward fruit of Grenache, and the rustic character of Mourvèdre. This intriguing, youthful wine is your perfect dinner companion. 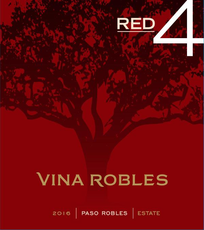