When you meet Leopardo Felici of Andrea Felici, you can tell instantly he’s got the pedigree from having worked in some of the best restaurants in the world. But when he talks of Le Marche and his vineyards in Apiro, you can sense his genuine love for being a vigneron. Indeed, since his father Andrea put him in charge of the estate 9 years ago, Leo’s focus has not been on marketing but rather converting the estate to organic farming to create the purest wine possible. Today Andrea Felici’s wines are considered the pinnacle expression of Verdicchio, with the tension between fruit and minerality found in the world’s great white wines.
Le Marche is a region often overshadowed by its more glamorous neighbors across the Appenines. It is a beautiful region of rolling hills flowing down to the Adriatic Sea. The shelter from the mountains keeps it sunny while the proximity to the sea keeps temperatures moderate. Combined with the fresh fish from the nearby sea it is ideal white wine country. The dominant native grape, Verdicchio, lays claim as Italy’s top and most ageworthy native white variety. In fact there are two Verdicchio DOCGs in Le Marche. Andrea Felici is located in Apiro, the highest of the villages surrounding the town of Jesi (Castelli di Jesi). The Esino river divides the region with the higher elevations being on rockier soils with the lower on heavier silt and sand. This elevation of Apiro allows for great day-night temperature shift and the wines express the clay/rocky soils on which they grow.Once Leo became a vigneron, he began transtioning the estate to organic farming—not because it was trendy but because he wanted to create the purest wine possible. In fact, he eschewed putting “organic” on the label because he wants the quality to speak for itself. All grapes are hand picked using small bins and wines are fermented in stainless and concrete. The wines see no new oak but are aged on the lees to add a creamy texture and are given extended bottle aging before release.
The wines have been very well received in the press with the Riserva earning the Tre Bicchieri award each vintage it has been released and the Classico have been a finalist multiple times
The DOC Classico Superiore is made from a blend of Verdicchio grapes harvested from various vineyards on the Felici farm, with vine age ranging from 7 to 35 years. Macerated for a few days on the skins and aged on the lees for 3 months in stainless steel tanks, then for 2 additional months in bottle before release. Drink within 6 years of release.

Seductive nose with lots of white fruit, pear, citrus, a little salmiak and a touch of salty. In the mouth very digestible with fine ripe fruit, crispy acids and a mineral aftertaste with a small almond bitter

Ampeleia is located in Maremma (Tuscany) on the Colline Metallifere (Metal hills) and is characterized by its high-rise from 200 to 600m above sea level that conveys biodiversity.It is a biodynamic farm managed by a group of young people in which Marco Tait expresses the vision of Elisabetta Foradori and Giovanni Podini and the terroir through the wines (Cabernet Franc and Mediterranean varieties).  Today Ampeleia is: 35ha vineyards, 54ha wood, 32ha arable and grazing land, 1.5ha olive grove, vegetable garden, orchard, 6 cows, chicken.

Cheverny is one of the most recent appellations in the Loire Valley (1991). The area, south of the Loire and abutting the marshy region of Sologne (the best hunting grounds in France), has produced wines since the 6th century. The soils consist of various combinations of clay, limestone and silica. Many varietals are planted: Pinot Noir, Gamay, Cabernet and Côt for red wines, Sauvignon Blanc, Chardonnay, Chenin and Menu Pineau for the whites. By legislation, a Cheverny wine has to be a blend of varietals, and François Cazin’s white is 70% Sauvignon Blanc and 30% Chardonnay.

Cazin tends vines of considerable age and the resulting yields are well below average in any given year. His Cheverny is fresh and floral, with appley-texture and crisp acidity. The flavors are sleek and precise. Since 1997, the wine has been bottled unfiltered by gravity. His wines have consistently been the top pick of the vintage at the annual Loire Valley wine show in Angers.

Notes
Alongside all the great wines which François makes, it’s shamefully easy to miss his complete, harmonious rosé, which folds Cheverny chalk minerality into layer upon layer of Gamay fruit and Pinot Noir finesse. Chilled, the wine is linear and insistent, but give it time in the sun, and it unfurls just so: vibrant, full of the light and warmth of a late summer Loire. 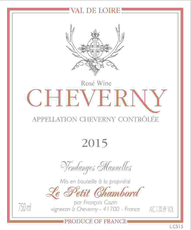 Éric Texier became a winemaker after a prior career and without any background in vines or wines. As such, his methods developed not from years of schooling, but from his readings, his visiting winemakers around the world, and working in Burgundy with Jean-Marie Guffens at Verget. After giving up the idea of buying vineyards, which was too costly a proposition for a beginner with his ambitions, he started a small negoce where he selected interesting vineyard plots from hard-working farmers who grew the healthy grapes he wanted to buy and vinify.

He re-discovered nearly forgotten areas of ancient fame, like Breze`me in the northern Cotes-du-Rhone and the new St.-Julien en St.-Alban, a heretofore unknown plot of ancient Syrah vines on the west bank of the Rhone that had been tended by protestant monks and has never seen artificial fertilizers or pesticides. The wines are vinified in their areas of production, and when they have obtained their AOC, the young wines are transported to Charnay-en-Beaujolais, just north of Lyon, where Eric lives and has recently acquired a wonderful elevage cellar. Exact steps in vinification vary according to the varietals, terroirs and vintages, but the goal is always to provide the grapes, musts and wines with the best environment and intervene as little as possible.

Notes
85% Grenache/15% Clairette/Viognier/Chasselas. Most of the Grenache and all of the white come from the granite soils of Texier’s St.Julien-en-St.Alban vineyard; some of the Grenache comes from his holdings in Vaison-La-Romaine in the Vaucluse. The whites and red are co-harvested and co-fermented mainly as whole clusters with native yeasts in concrete tanks with a short 5-day maceration and without any punchdowns. The wine is aged for around a year in concrete tank and bottled with a very small dose (15g/liter) of sulfur. The intention is a fresh, light style of Côtes-du-Rhône. 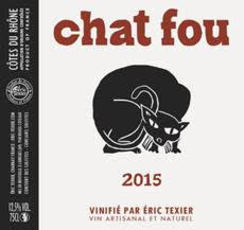